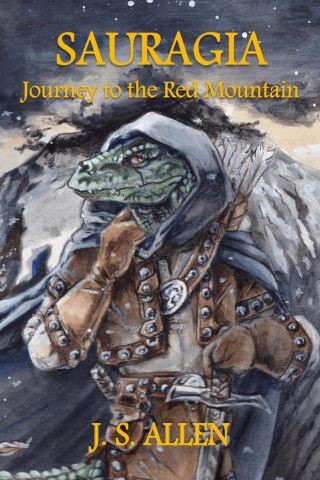 Journey to the Red Mountain

"Ten years have passed since the Saltrak War. The dinosaurs of Cardolin once again enjoy a prosperous peace under the wise King Henrik. But the peaceful times are over!"

When a mysterious stranger arrives injured on the night of a fearsome blizzard, the kingdom's fortunes take a turn for the worse. Rumours abound that the stranger is somehow responsible for the ill turn in the weather. And when his old nemesis on whom he has sworn vengeance it is once more up to Astron and his friends to save the day. Battling bandits, disease, and the whims of nature alike, the brave Saurahallers must pull together to ensure their kingdom’s future and right past wrongs…or else watch everything they have worked so hard to build crumble before their very eyes.

J.S.Allen: J. S. Allen was born and raised in Kansas City, Missouri. In addition to the Sauragia series, he has contributed work to several magazines and literary journals. He is also the author and illustrator of Woodland Tales, a short story anthology for younger readers.